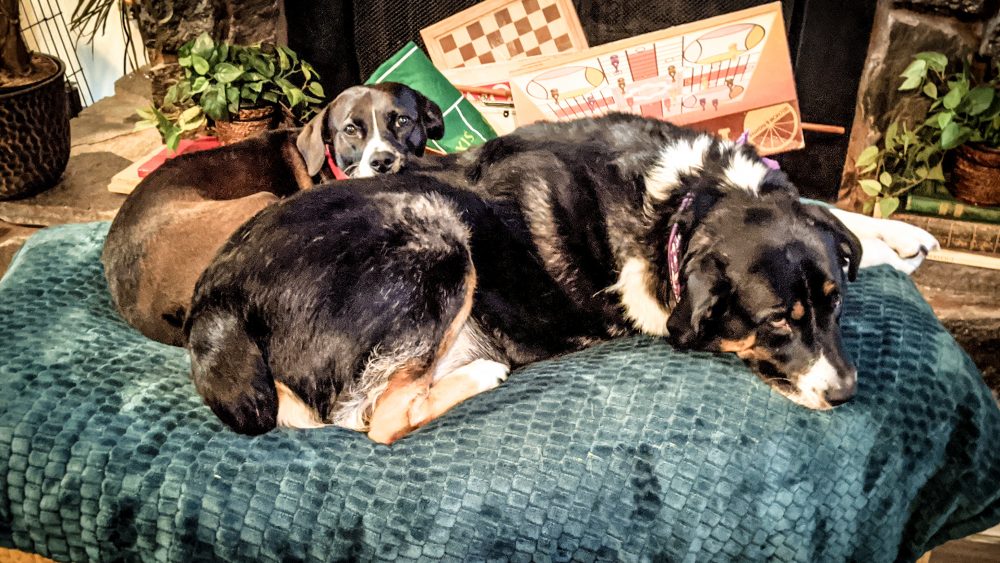 Multi-dog households: Who is the real ring leader?

One of my favorite hobbies is observing the wonderful intricacies of communication between my dogs. The way they play and interact is so fascinating to me – I could binge watch them for hours like a hot new Netflix drama. For two dogs who are so completely different, in both size and personality, they have quite dynamic synergy.

Malcom has lived with us for 6+ years, and Evey just barely 1 ½. Living with them, knowing them as well as I do, it’s difficult sometimes to overlook that personal knowledge and emotionally detach enough to be able to view them from a scientific standpoint, rather than as my adopted children. This, admittedly, is my biggest hurdle when it comes to their training. I am often blinded by my love and adoration for them, making it difficult at times to evaluate and modify some of their undesirable behavior.

Thinking in terms of Leadership, if I gave you a breakdown of their history, it’s likely you’d come to the same original conclusion as I did. Malcom is older, has lived here longer, is bigger, and has an aggressive, domineering personality. He’s a brute who confronts anything and everything he isn’t 100% sure of, with the appearance of an unhinged, ferocious animal.

Evey, on the other hand, is small, quiet, timid, and the type to instantly flee at any remotely minimal sign of perceived danger. When confronted with new situations that she can’t process, she immediately resorts to appeasement or a complete shutdown. Really, the only similarities they share are their species, coat color, lack of confidence and fearfulness of the world around them. Clearly, Malcom is the mighty leader of their tiny two-dog army.

Now, that assumption would have some truth to it. But only if it pertains to situations involving food. For example, if dinner is late, Evey would quietly starve. Malcom has a conniption. First, he takes Evey’s bowl from her crate and plops it in front of wherever she is. Then, he gets his and throws it at our feet, looking back at Evey like he’s waiting for her to join him. If those demands aren’t met swiftly, he will then start to poke his nose into your leg repeatedly, between frantic barking. He works himself into such a frenzy, that Evey, who is usually calm until this point, will go sit next to him, and whine along. It’s quite comical to witness.

However, that is where Malcom’s leadership role ends. If you watch them closely, detailing the nuances of their movements and mannerisms, you’ll discover that Evey is the one who governs most of their daily activities. If Malcom were the decision maker, he would gleefully sleep all day, preferably alone, in his own bed, while taking breaks only to eat or bark at imaginary threats outdoors.

I wouldn’t exactly use the word, Leader, to describe Evey though. She’s more of a tiny Dictator, exercising absolute power and unrestricted control over our entire household. None of us understand how this happened, as we were never given a vote. And any attempt to overthrow her is pointless, because her ability to charm is equivalent to mind control. We are all powerless. Initially we assumed that Malcom would guide and influence her, taking on more of a responsible older brother type role in their relationship. We were wrong. Evey determines when it’s time for them to play or to nap, when they want walks or potty breaks, and when it’s time to snuggle.

Malcom doesn’t even snuggle. He rarely plays. Never begs for walks. At least he didn’t until Evey forced her wicked ways upon him. He attempted many times to thwart her uprising. He would growl if she approached, turn his head away, get up and move, even going so far as growling, barking, and snapping at her on occasion. But she was relentless in her determination to bond with him. Eventually, his defenses began to break down.

First it was playing. Malcom’s only prior interest in toys were to devour or annihilate them. Limited in what we could buy, for his safety, we collected a bucket full of unused dog toys. Balls, rope toys, and the super durable kind, toys that are no fun for a dog like Malcom who enjoys ultimate destruction. Over and over Evey began to bring Malcom a toy and just stand there next to him with it pressed into his face. Quiet. Patiently she waited.

When they were outside, she would run circles around him, pausing briefly to bow playfully in his face. Or she’d run up to him, and lightly paw at his head or nibble gently on his leg and wait. One day, he began to tug the toy. Another day he bowed back and gave her a chase. Then he started to paw his giant foot back at her, clumsily. He would stick her whole head in his mouth, gently, and gurgle back sounds of enjoyment. Now he eagerly welcomes her initiation of playtime and mirrors her every move with a less graceful version of it.

Next, came the snuggling. Day after day she would climb into his bed, next to him on the couch, or follow him to his crate, and just quietly lay next to him. When he pushed her away, she waited until he settled to try again. When he barked or growled at her, she would just flatter him with appeasement signals and try again. One day, he stopped resisting her advances. She walked right up to his bed, climbed into the little spoon position, and they snoozed together peacefully for a while. It’s become a daily occurrence at this point.

It gets worse. Not once prior to her reign did I ever heard Malcom whine or beg to go outside for anything. We always had to ask him if he was ready. If he was, he’d lazily trudge over and get leashed. If not, he’d ignore you. Now we merely glance in the direction of the leashes and they’re putting on their show. Evey, a diabolical glimmer in her eye, prances about with a shoe in her mouth, wiggling her entire body wildly. Malcom, the traitor, awkwardly mimics her steps. It all started with that darn shoe. When Evey wanted to go out, she’d grab one and proceed to sashay her way around the living room, pausing in front of each of us for a moment to bat her eyes and twirl around. If no one responded quick enough, it turned frantic with incessant whining added for dramatic effect, and potential destruction of shoe.

We were all doing well to extinct this behavior by ignoring it and had almost succeeded. Then, Malcom deflected. In a moment of weakness, he stopped ignoring her, and began to whine along with her. I swear, he even gave us this grin that can only be described as “roguish.” Now when she grabs her stupid shoe and starts the prance, Malcom stomps his feet around, perfectly in sync with her butt wiggles, while he perfectly harmonizes his whining with hers.

The speed at which he betrayed was the most astonishing. Within the first 5 days of Evey’s arrival to our home, she had completed the initial snuggling infiltration. Within 2 weeks, she had him playing. While the rest of her hostile takeover was slowly spread across the next 4 – 6 months, it wasn’t subtle, and it’s reaches were far and wide.

With Evey’s companionship, we made more advancement in Malcom’s confidence levels and CCSD training on walks, than we did when he started anxiety supplements a year or so prior. The way she has influenced and changed him, is extraordinary. And while Malcom remains in control when it comes to food and takes the role as her fierce protector out on walks, within the safety of our home environment, Evey is truly the ruler of us all.